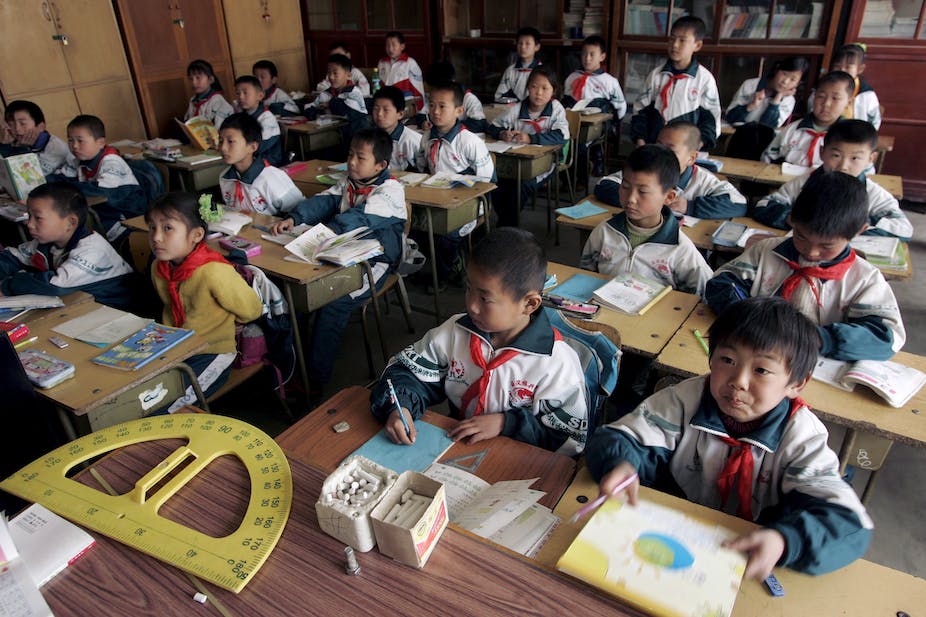 Chinese students begin learning their maths facts at a very early age: maths textbooks begin with multiplication in the first semester of second grade, when children are seven years old. In order to understand multiplication, pupils have to memorise the multiplication rhyme: “four times eight is 32, five times eight is 40” and so on, which was invented by ancient Chinese scholars 2,200 years ago.

Stemming from this tradition, most classrooms have few concrete teaching materials for maths lessons. The cultural traditions of Chinese maths education lead people to believe that routine practice is the most efficient way to learn.

This continues today. And as a result, schools in Shanghai have scored highly in recent years on international tests of maths ability. It is this aptitude for maths among Chinese schoolchildren that has led the UK government to announce plans to bring over 60 maths teachers from Shanghai to help teach in centres of excellence.

The Chinese curriculum in maths is a nine-year programme divided into four mathematical stages, running from primary school to grade 9, when a child is 14 years old. The curriculum sets out four teaching periods a week for maths in primary and junior high schools. However, most schools arrange more than five periods each week.

Because of China’s standardised curriculum and teaching, the national exam system, and the one child policy, teachers and parents in China have big expectations for their students from early on. There is a high degree of parental involvement and parents prioritise their children’s education, especially in maths, which is one of three core curricular in national exams.

A typical teaching period in primary schools is approximately 40 minutes, extending to 45 minutes in secondary school. Teachers often set at least half an hour of homework every day for primary school pupils and more for secondary pupils. So it’s normal for Chinese pupils, particularly secondary and high school students, to spend more than 15 hours per week on maths both in and outside the classroom.

A new compulsory mathematics curriculum was introduced in 2001 and revised in 2011, setting out standards for “number and algebra”, “space and graph”, “statistics and probability” and “practice and applications”.

The goal of maths education in China is to develop conceptual and procedural knowledge through rigid practice. In comparison, the UK maths curriculum is less focused and consistent. China uses whole-class instruction, engaging all students in the material and prompting feedback. This is different to the UK model teaching of maths, which is more focused on small groups and individual attention.

Chinese students are taught to understand numerical relationships and to develop and prove their solutions to problems in front of the whole class. This means students understand whole concepts of maths, allowing them to apply previous knowledge to help them learn new topics. 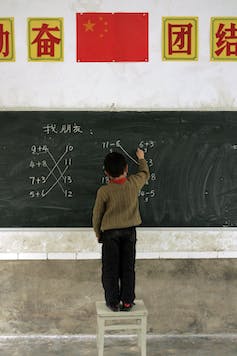 When a Chinese teacher introduces a new topic, they tend to use different kinds of examples that vary in difficulty.

This way of teaching with variation has been applied either consciously or intuitively in China for a long time. In class, maths teachers also emphasise logical reasoning, prompting pupils with questions such as “why?”, “how?” and “what if?”.

Chinese maths teachers also emphasise the use of precise and elegant mathematical language. In secondary school maths exams, if pupils do not write according to the mathematical format required, marks will be deducted.

Nearly all Chinese teachers teach a single subject, rather than multiple subjects. Most of them teach only two classes per day in primary and secondary schools. But compared with their counterparts in the UK, most Chinese math teachers have to deal with larger class sizes without streaming for ability.

Chinese maths teachers usually spend a considerable amount of time each day writing out detailed lesson plans, or correcting homework and marking examination papers. They also have access once a week to locally-organised teachers’ research groups, where they can get suggestions for good lesson plans.

Compared with their counterparts in the UK, Chinese maths teachers are not very good at integrating concepts across the curriculum. Even though pupils spend 15 hours per week learning maths, teachers often complain that they lack time in their teaching schedule. They have to deal with frequent grade-level tests every two or three weeks and school level tests every term.

Some good maths teachers, particularly those who come from quality schools, encourage pupils to learn about the interrelationship mathematics has with daily life. They also give full consideration to meeting the individual needs of the students. They frequently use active participation to check for individual understanding during a lesson, and integrate methods and real life projects in teaching mathematics.

However, most pupils in rural areas have few chances to access to this high-quality teaching. Many Chinese teachers who face the pressure of an examination-oriented education system do not see a reason to do activities that connect maths to real-life. It’s easier to just give students the information required and teach them the process.

Why I chose to study in China