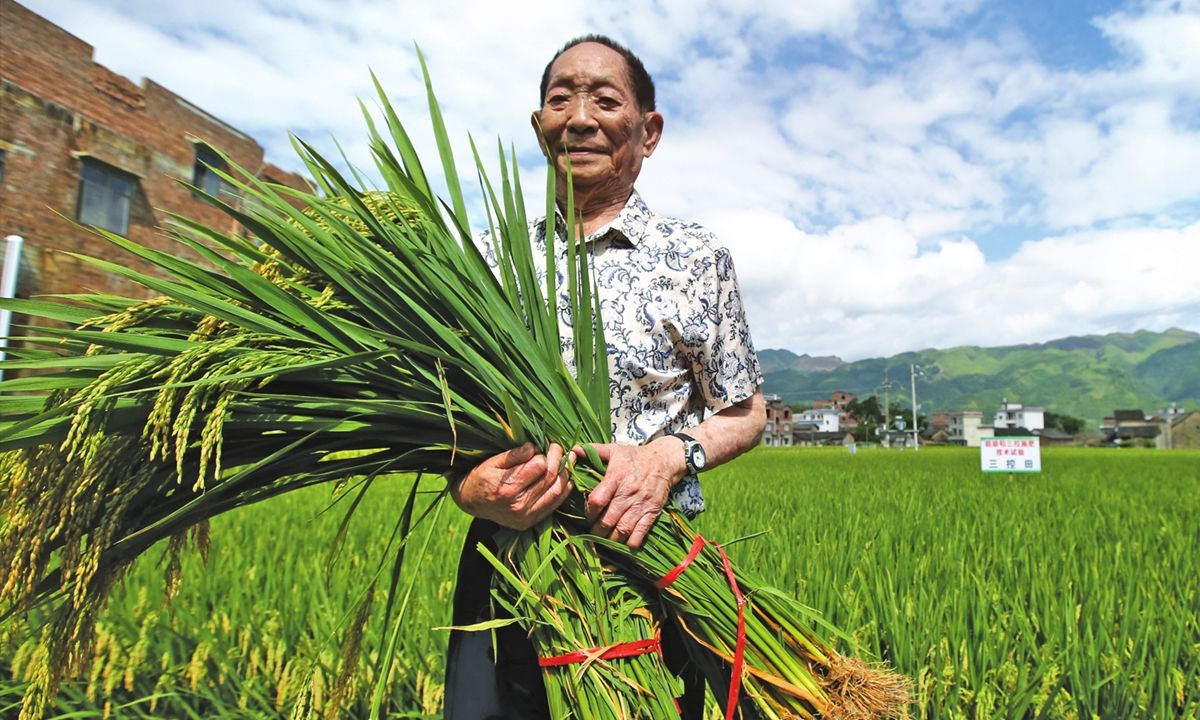 BEIJING (Global Times): Throughout Changsha in Central China's Hunan Province, the chrysanthemums that are used to send condolences were sold out. In front of Mingyangshan Funeral Home, more than 100,000 people lined up in the rain to lay flowers in memory of Yuan Longping, a renowned Chinese agronomist dubbed the "father of hybrid rice." The number of people continued to grow and stretched for several kilometres.

After the news that Yuan passed away on Saturday (May 22) at the age of 91, countless Changsha residents flocked to Xiangya Hospital to say a final goodbye to Yuan, as the hearse carrying his remains drove away. Along the motorway where the hearse passed, vehicles honked in mourning, and people gathered on the sidewalk shouting "Farewell! Grandpa Yuan!"

Yuan's memorial service will reportedly be held on Monday.

On Sunday, there was a large number of people who had continued their vigil in a separate memorial hall, laying chrysanthemums before retreating to the roadside, standing in contemplative silence for a long time, with some having driven from outside Changsha, and some others bringing their children to pay their last respects.

A mother brings her child to the memorial hall of Mingyangshan Funeral Home to lay flowers in tribute. Photo: Cui Meng/GT

A mother brings her child to the memorial hall of Mingyangshan Funeral Home to lay flowers in tribute. Photo: Cui Meng/GT

Liu told the Global Times that her parents, who are in Jinggangshan in East China's Jiangxi Province, will also be in Changsha on Sunday because they also want to say goodbye in person.

"Since I was a child, my parents taught me to eat all the rice in the bowl at every meal, because rice is not easy to come by. We all appreciate Yuan's dedication," she added.

Flowers were also seen in front of a statue of Yuan Longping in Southwest University in Chongqing on Saturday. Many teachers and students from Yuan's old school expressed their sorrow at the loss and shared their condolences on campus.

Aside from mourners on the ground, millions mourned Yuan online. Netizens hailed Yuan as "a great man of our time." In a virtual condolence hall set up by local media, over 8 million people had paid tribute to Yuan as of press time.

Students place flowers before of a statue of Yuan Longping in Southwest University in Chongqing on Sunday. Photo: IC

Students place flowers before of a statue of Yuan Longping in Southwest University in Chongqing on Sunday. Photo: IC

"For Yuan's students and colleagues, all of us work in various places were saddened by the news," Wang Shigang, director of Yuan Longping Workstation of Hinggan League in North China's Inner Mongolia Autonomous Region, told the Global Times on Sunday.

"Although Yuan passed away, the content and goal of our previous work will not change. We will convert grief into strength and carry on the work he left undone," Wang added. - Global Times

Why China’s E-Grocery Giant Is Pouring $1.5B Into Sustainable Ag-Tech