Traditional snack signals the advent of the Dragon Boat Festival 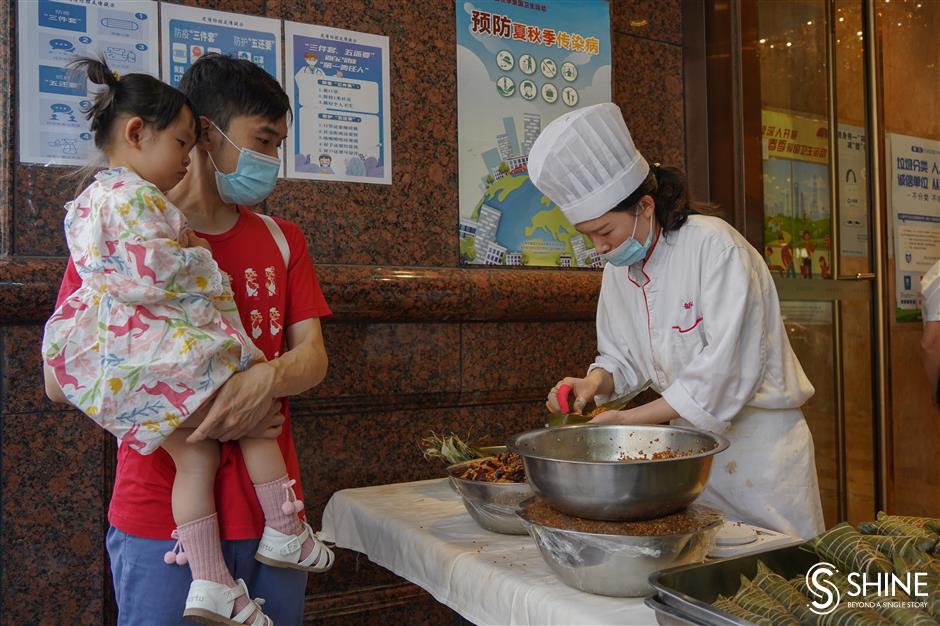 A chef at Sunya Cantonese Restaurant on the Nanjing Road E. shows her skill in making zongzi. 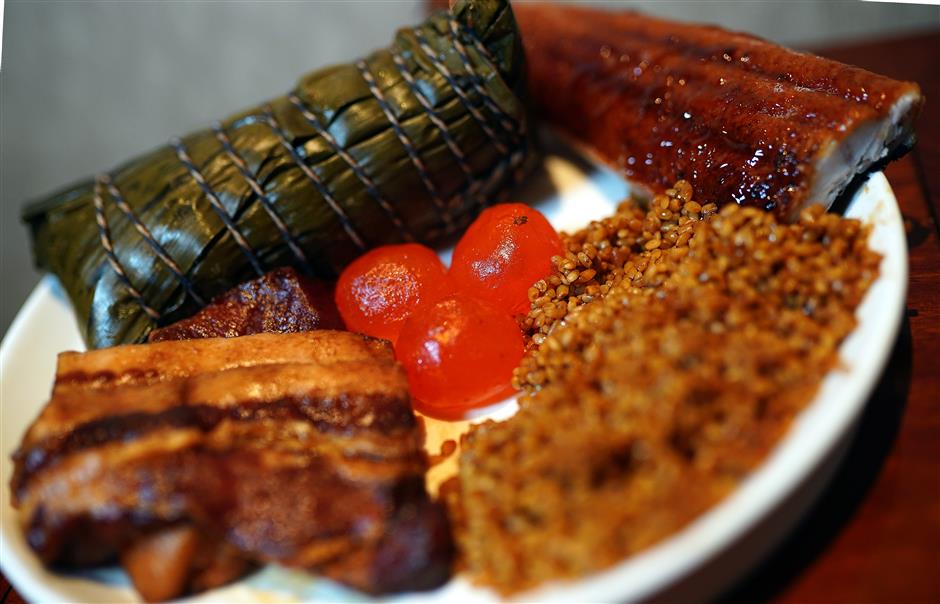 Xing Hua Lou restaurant has launched a new flavor of zongzi with stuffing of roast eel, pork and egg yolk.

Just sniff the aroma in the air on Shanghai streets and you'll know that the annual Dragon Boat Festival is nigh.

The aroma comes from zongzi, a wrapped steamed glutinous rice dumpling of different fillings that is just as traditional as the holiday itself. The festival falls on June 14 this year.

You see zongzi for sale everywhere, characterized by wrappings of bamboo, reed or other flat leaves, bound with string.

Time-honored restaurants in the city are experimenting with new fillings to give the snack new vitality and to appeal to younger palates.

"It has a light and fresh flavor," said executive chef Huang Renkang, who has been in the catering industry for over 40 years.

He uses black rice, made by boiling the rice with the juice of crushed mountain leaves. Black rice dates back to the Tang Dynasty (AD 618-907) in the region just south of the Yangtze River.

"Compared with traditional rice, the black rice is more fragrant," said Huang. "The zongzi is fresh with the fragrance of grass and wood from the mountains when you open its leaves." 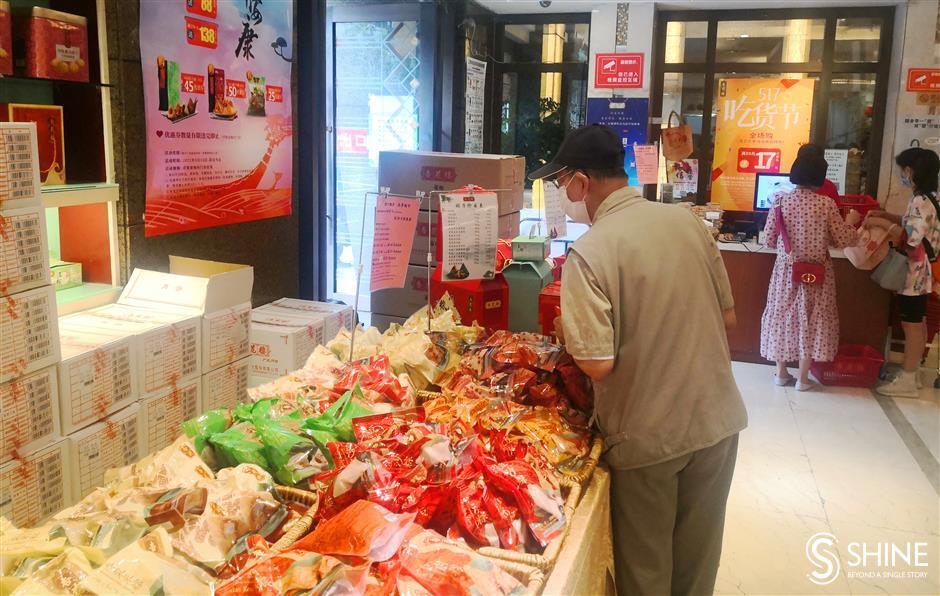 A consumer is attracted by various choices of zongzi at Xing Hua Lou.

The restaurant's other innovative offerings include abalone with barbecued pork in honey and fillings such as sea cucumber, dried shrimp and mushroom.

The "Big Mac" of zongzi weighs 280 grams, compared with the typical varieties of 160-200 grams. It is filled with four big pieces of pork and is among the restaurant's best sellers.

The ratio of fat to lean meat is strictly kept at 3:7.

"Chefs compared a variety of available pork and finally selected an imported one," Huang said. "The rice undergoes several hours of pickling and steaming. The final product is fragrant and glutinous and has a smooth Shanghai flavor."

Wang Shifeng, 37, has been making zongzi at the restaurant for six years.

"Making the snack appears simple," she said, "but it involves a number of procedures: layering leaves, folding the bottom into a cone, picking proper pork, filling the bottom of the cone with rice, adding the pork, topping it with rice, wrapping, and finally fastening the leaves with twine."

She added, "It is important to use both fatty and lean meat and mix them well in the rice to enrich the taste."

Huang said more than 3,000 zongzi are sold daily at the restaurant, and the sales peak has already arrived. 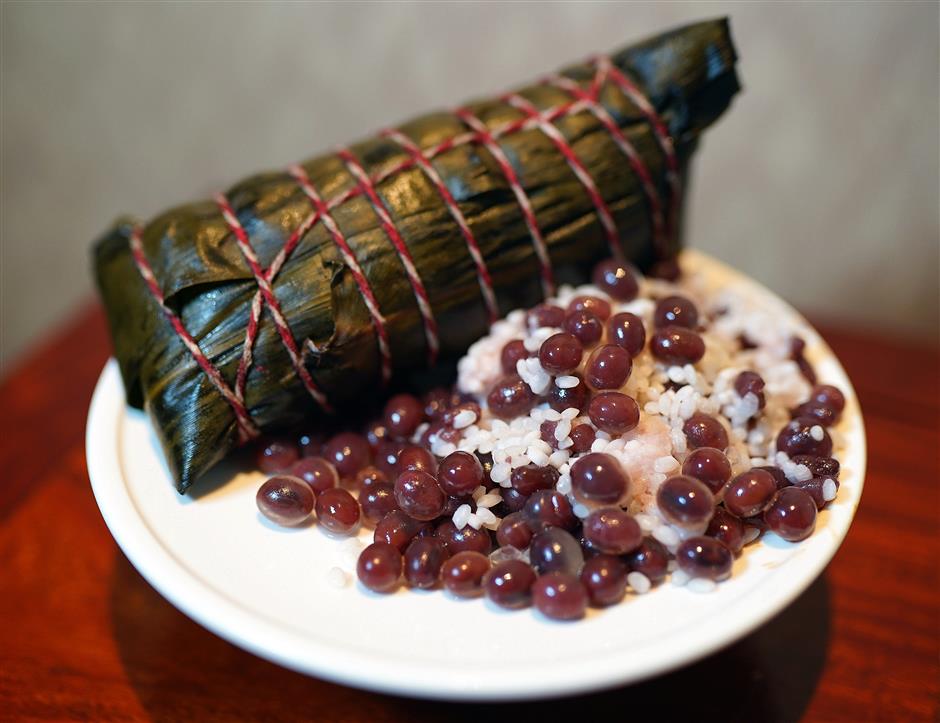 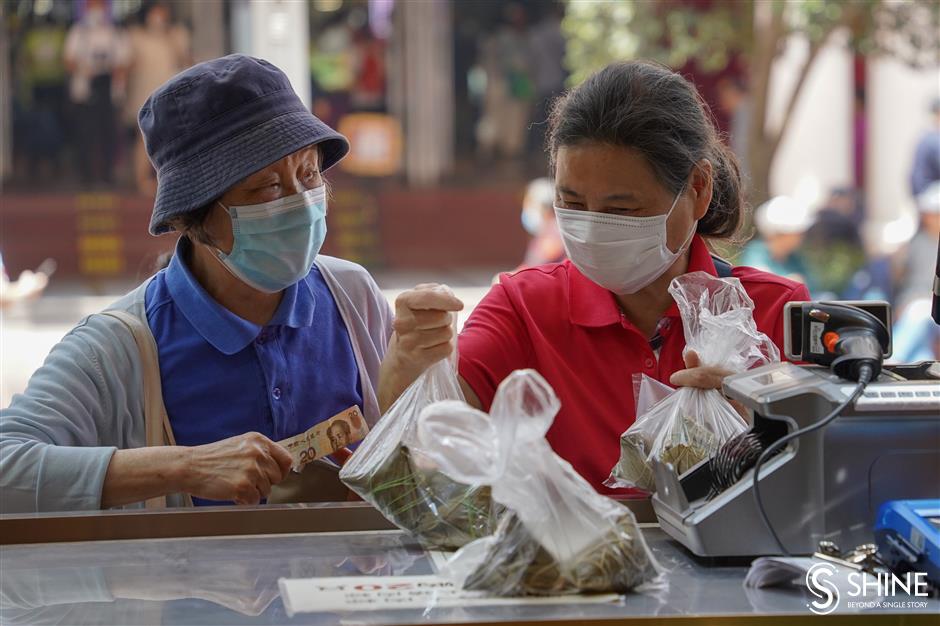 Xing Hua Lou restaurant in Huangpu District, which dates back to 1851, has added two novel fillings for this year's festival.

One features roast eel, pork and egg yolk; the other is made from red bean bubbles and honey. Its name is reminiscent of red bean bubble tea, a popular Taiwan drink made of tea infused with red bean paste and served with tapioca balls.

"The new flavors are a breakthrough in traditional zongzi," said Zhang Jiquan, a dim sum master at the restaurant. "It's the first time that a fish product has been used because the fishy smell is not easy to eliminate."

Zhang said the inspiration for the eel filling came from Japanese-style rice with roasted eel. The eel used in zongzi has been preserved with special sauce and is masterfully grilled, he explained.

"The flesh simply melts in the mouth, with the two yolks, streaky pork and rice enriching the flavor," said Zhang. "The sweet-flavored zongzi, with chewy red bean bubbles and honey, is particularly favored by children and young people." 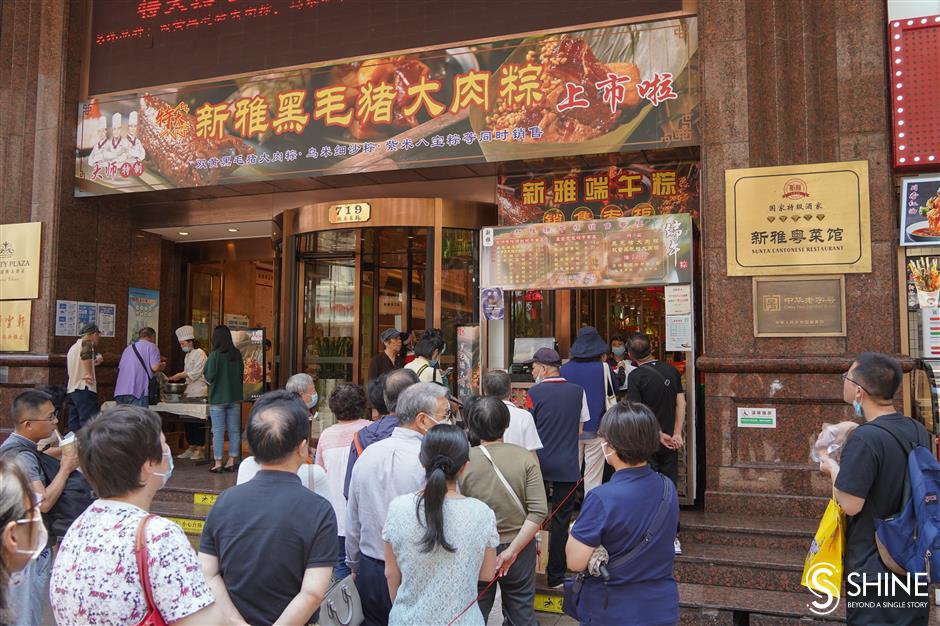 Long queues are seen outside Sunya Cantonese Restaurant to have a bite of the seasonal delicacy.

"In fact, roast eel is on our restaurant menu as a cold dish, and it's popular among young people," she said. "But we haven't dropped our traditional Chinese flavors, thus pork is kept in the filling. It's is an East-meets-West approach."

She added, "Pork filling is the most traditional and also the most popular zongzi stuffing for Chinese people."

The sales peak usually comes a week before the festival, said Wang.

"Overall, salty flavors sell better than sweet ones," she said. "Sales this year, so far, are better than last year. People prefer our handmade zongzi to those made in factories."

Consumers, especially the young, are willing to try new flavors.

"I am a fan of Japanese cuisine, so I am buying a zongzi of roasted eel rice out of curiosity," said Shanghai white-collar worker Chen Yu, who works near the restaurant. "It is an innovative approach, and I will buy more if it proves tasty."

Wang Yongting, a customer in her 20s, bought zongzi in both new and traditional flavors.

"It's good to have some creative new flavors," she said. "The sweet flavor with chewy red bean bubbles sounds like bubble milk tea, which is my favorite. I also bought two with pork and yolk for my parents."

Shanghai resident Shen Ping, who is in his 60s, recalled his mother making zongzi with pork filling at home for the festival, but he said she is now too old to do that.

"Traditional taste reminds me of family and evokes memories of a bygone era," he said as he purchased three zongzi with pork filling for his mother.

Other restaurants in Shanghai are also offering up new concoctions.

The Central Hotel Shanghai is selling zongzi filled with scallops and sausage, while Da Fu Gui Restaurant is hoping to attract the younger generation with a filling of black sticky rice and runny egg yolk.

Chinese Gift-Giving: What Not to Buy